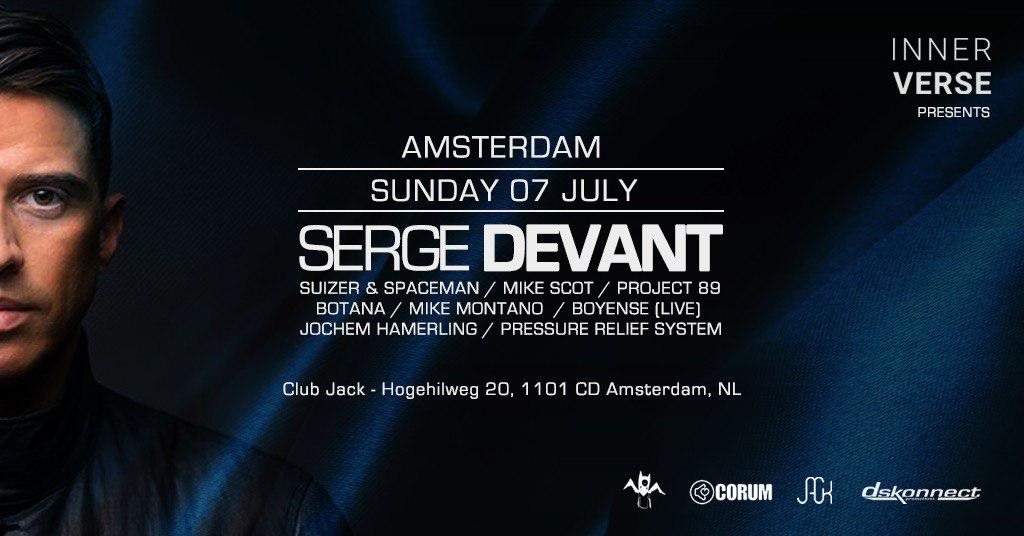 Charged with the energy and sound of Ibiza, a solid team of promoters and DJ's bring you INNERVERSE: A playground for the mind. Our goal is to provide the spectator with a complete sensorial voyage, stimulating the senses to create a profound auditive and visual impact for an ethereal experience. For this double debut our headliner of choice is Serge Devant, notorious producer amongst the mighty Crosstown Rebels, Knee Deep in Sound and Emerald City. Coming with strong momentum from DC10 Ibiza and Fuse Records ' 8th anniversary, Serge will take over our terrace at sunset, mastering the craft of that particular sound which resonates deeply with the essence of our brand, closing the day and welcoming the night in style. Stacking up the bill we have teamed up with Amsterdamâ€™s Mea Culpa Records who bring their frontman MIKE SCOT and residents PROJECT89 and Jochem Hamerling, known from the The Boom Room.. Furthermore we present Dutch up and coming local talent Pressure Relief System and a live performance from Boyesen Music, an Amsterdam based award winning composer and sound designer; the multifacetic Botana, former resident of world renowned clubs like Elrow City, Ker Club and La Terrrazza Bcn. Some say that best for last and definitely not least which in this case applies to one of MexicoÂ´s finest: Mike MontaÃ±o. With big names of residencies and labels under his belt, from Beef Records Entertainment Studios and Houseworx to En Rose La Vie En Rose and Tretmuehle; with a career span of almost two decades, a former staple of the The BPM Festival, which has constantly gained support from some of the biggest names in the industry. The event will encompass both terrace and club in a 12+ hour journey powered by Funktion-One (Official) sound system taking place in JACK Amsterdam.